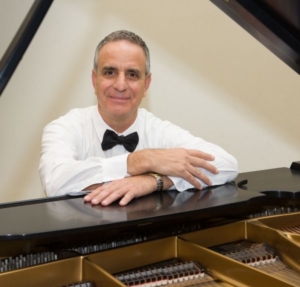 Bob Freaney is a retired United Air Lines pilot, a retired US Air Force Officer, and a returning Fallbrook Music Society board member.

Bob graduated from the University of South Carolina in 1978 with a Bachelor of Arts degree in Applied Piano Performance. He has studied piano with Prof. John Kenneth Adams, Dorothy Miller-Dunlap, Dr. Peter Gach, Dr. George Fee, and Emile Sinz.

Bob and his wife, Jennifer, have lived in Fallbrook since 1992, raising two children, Ryan, who flies B737s for United Air Lines out of San Francisco, and Courtney, who works as a human resources director at Edwards Life Sciences in Irvine.

Make your gift by September 1st and you’ll get an invitation to our exclusive donor party!

FMS is a 501 (c) (3) not-for-profit organization.All gifts are tax-deductible to the fullest extent of the law, If you have any questions, please contact your attorney or tax advisor.